Hi everyone. I’m Mercedes and I’m a nerd. I love “Doctor Who” (not that a love of a long-running, British, sci-fi show is nerdy in and of itself, but in my case it is evidence of my nerdy-ness). As you can imagine, I was very excited about the 50th anniversary episode of Doctor Who that aired, well, quite a while ago now. In celebration of the landmark episode I baked. A lot. I did share this on my old blog when it actually happened, but I’m so proud of this cake that I’m posting it here as well. 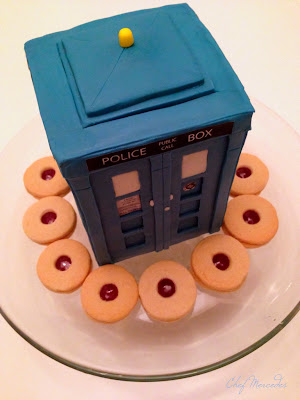 I planned to make a TARDIS cake (as you can see I was successful) but with schoolwork (lots of schoolwork–I was finishing up my first term of grad school) and just the general challenge of making a cake that looks like a police phone box, I wanted a back up. So I made jammie dodgers. Jammie dodgers are a mass-manufactured, British cookie a bit like a shortbread version of linzer cookie. They are also the Eleventh Doctor’s favorite cookie. 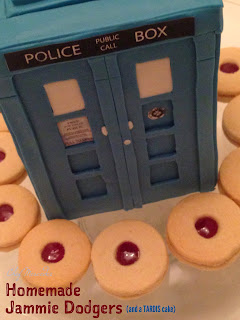 Jammie dodgers are easy enough to make. I made a batch of shortbread cookie dough and rolled it out and cut it raw (rather than baking it in a pan and cutting it after). I cut a bunch of rounds and then cut holes in the center of half of them. Baked them and left them all until the day of the special. Then I just spooned a thin layer of seedless raspberry jam onto the plain rounds, leaving about 1/4 in diameter un-jammed. Then I just sandwiched the hole-y rounds on top and, voila, jammie dodgers. They are delicious, by the way, and I think they may end up on my Christmas cookie platter this year.

I also make a TARDIS cake. This probably needs some explanation for the non-Whovians out there. The Doctor is a time-traveling alien. His space ship/time machine is called a TARDIS. The TARDIS is meant to use its ‘chameleon circuit’ to blend in with the environment it lands in. Unfortunately the circuit on the Doctor’s TARDIS broke when he was on Earth in the 1950s while it was disguised as a police phone box. The TARDIS is bigger on the inside (a running joke in the show as well as in this post, which is why I’m mentioning it.)

Okay, now that you know what a TARDIS is, I can tell you about the cake version. I made a chocolate sheet cake–a great recipe from Martha Stewart, by the way–in a 9x13in pan. (A great recipe by the way, I’ll definitely use it again.) Once it was cool, I cut it into 3.5×3.5 inch squares and leveled off the top of each cake square. I wrapped them well and put them in the fridge overnight (that’s just because it was all I had time for that day). 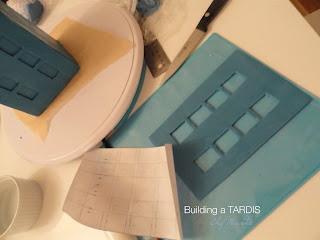 I chilled this base overnight and then when to town with blue fondant (which I hand dyed, because you just can’t find pre-colored TARDIS blue fondant for some reason…) At this point it seems like a good idea to mention that I owe a lot to Ashlee (at I’m Topsy Turvy) who posted a how to guide for their TARDIS cake and to The Artisan Cake Company who posted the printable TARDIS signs they used for their cake (and another great guide). 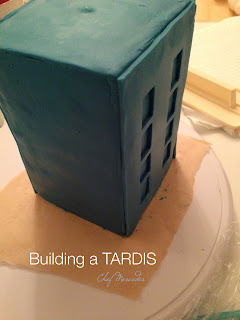 I based my decoration techniques off these guides, although I didn’t follow them to the letter as I was in a bit of a time crunch and I had my own ideas for certain things (like the roof). Basically, I covered the whole cake in a thin layer of fondant. Then, with a carefully drawn template as a guide, I rolled out thin side panels and cut rectangular holes in them to mimic the paneling on the side of the TARDIS. I carefully glued them on with a bit of water and a lot of patience. Then a bunch of strips for the corner panels, etc. Some white (well very, very, pale ivory) rectangles for the windows slotted into the top row of indented rectangles–I was going to make the lattice of wood between the panes of glass but I ran out of time and energy (and it was just for me, my parents and one friend). For the roof I made the sloped part by rolling out fondant as you would for the detrempe for puff pastry and stacked it on a slightly larger flat square. A small yellow light topped it off (my pops’ reaction was that it should have been blue because “policemen are blue” but I think yellow fondant looks more like a light than blue.) 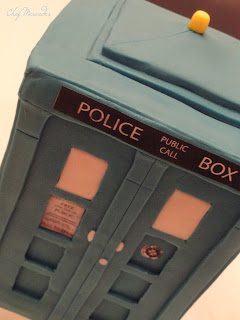 I printed the signs (the signs for the front door and all the police box signs) on paper and, with just a mist of water, stuck them on. Generally I’m not keen on non-edible decorations on cakes, especially when they are paper, since it wouldn’t be impossible to either paint/draw these on or at least use edible ink and paper. But of course I don’t have edible ink and paper and a food printer and I’m not nearly skilled enough with a food safe pen or paint brush to make these on my own–at least in the time constraints I was working under. I admit I think the printed ones looked pretty darn perfect and they were so easy to use…I may be warming to using printed (non-edible) elements in cake decorating. 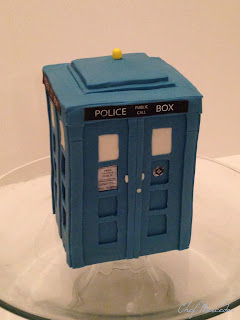 That’s it! I was done in time for dinner and then we munched on the jammie dodgers during the show–which was freakin’ excellent!–and saved the cake for after the show was over. Oh goodness it was hard to cut into my creation…but I knew there was chocolate cake with mocha buttercream hiding under that perfect fondant TARDIS covering just waiting to be eaten.

And eat it we did. It’s a shame it wasn’t bigger on the inside, I’d have liked some extra cake! Joking aside, the cake was delicious, moist, rich, and chocolaty; the mocha buttercream was coffee-y enough to really complement the chocolate. Even the swiss meringue buttercream and fondant coating were good, albeit a bit sweet. Gosh this was fun to make. I really need another excuse to do something like this–especially because (more than two years later) I feel like I’m letting my skills slip a bit. Moving to a studio apt with a tiny kitchen will certainly make it easier to do things like this…

P.S. Sorry the photos aren’t as striking as usual. They are imported to this blog from my from blogger, via a very nice blogging app and, more recently, my retired wordpress blog. I’ll try to dig up the original photos (I took them with a decent camera, not my phone) and replace these…