Sometimes you just want a sandwich. I find myself especially interested in sandwiches during the hot summer months. You don’t need to turn on the oven or wash too many dishes. Now you can always slap some deli meat between two slices of bread and call it a day; many times I do just that. But sometimes I want a bit more. Inspired by ‘Wichcraft, a local NYC chain and cookbook entirely devoted to making gourmet sandwiches, I kicked my sandwich up a couple of notches. 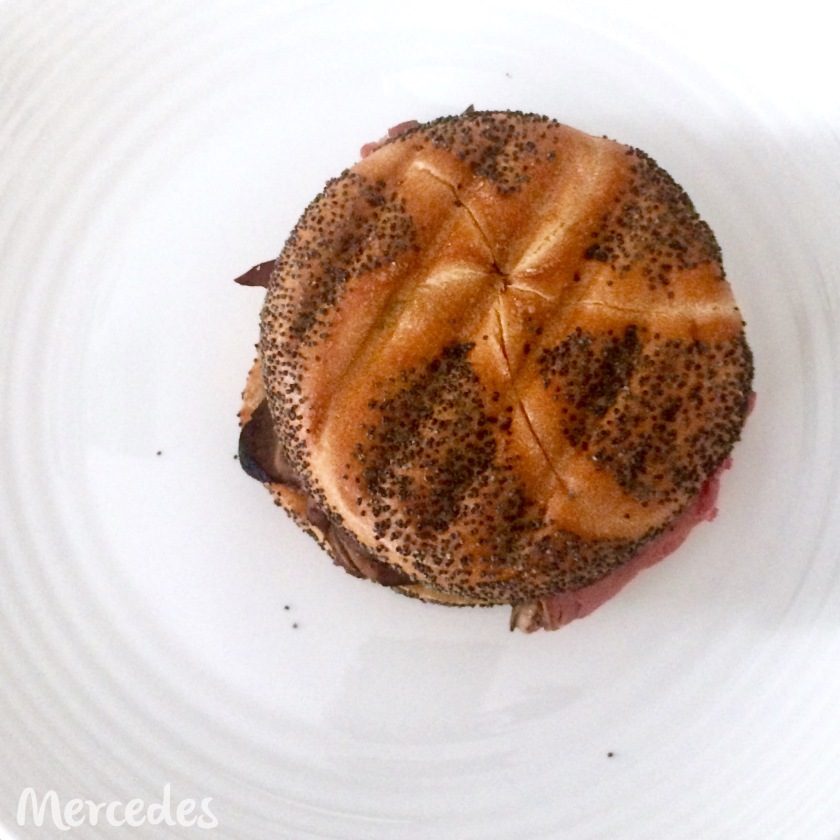 Start with a poppy seed kaiser roll cut in half fresh for the sandwich. Hollow out the top of the bun a bit and coat the bottom half with a thin layer of cranberry-onion jam, set aside. Sauteeing crimini mushrooms (brown button mushrooms), once they have given up their liquid and have started to shrink up, pour in a bit of red wine. Keep cooking until all the liquid soaks back into the mushrooms or evaporates. Meanwhile slice the bartlett pear very thin (about 1/8 inch if you can) and put a few slices, in a single layer, on the bottom bun. Top that with your lovely pink-but-not-bloody roast beef. Put sauteed mushrooms (drained, so the sandwich doesn’t get soggy from the juices) in the hollowed out top bun. For the final ingredient, spread/put soft gorgonzola dolce chunks on top of the beef.

You could leave it there if you want, but if you’re like me, you’ll want to do this last step. Put your sandwich on a panini press (I’ve got a cast iron grill pan with a panini press lid, but you could obviously use one of those electric ones.) Leave it until the cheese melts, the beef gets warm, and the exterior of the bun gets toasty! Serve with sweet potato chips. Perfection.