I’ve lucked out recently; I’ve gotten some great apples at reasonable prices. Yesterday my luck ran out. I’ve got three granny smith apples that are unbearably tart. What to do? That’s easy: make apple crumble! I haven’t made it yet (I started a new term of classes this week so I haven’t exactly had the time) but I will soon. And when I do, I’ll use this recipe.

So here’s a throwback to throwing things together–no recipe, no fallback ice cream in the freezer–and making a fabulous apple crumble (although, in hindsight, it’s more of an apple crisp) with a fabulous friend.

The last weekend I was with my friend Sophie we went to her place upstate. It was lovely and we picked up some beautiful peaches and apples at a local farm stand. I picked up some oatmeal at the store and planned to make a peach crumble, but it turns out all the peaches had been eaten…oops! So I decided on apple crumble instead.

I raided the pantry and found flour and brown sugar (the essential ingredients along with the oats and apples I had in hand) but it turns out they didn’t have butter, so I used olive oil instead. I figured I’ve used oil as a fat in cake (vegetable oil for chiffon cakes and olive oil in the occasional cake as well) and if it’s okay for something as finicky as a cake it should hold a crumble together alright. So I sliced the apples (Ozzy, Sophie’s standard poodle, was happy because I gave him all the bits I didn’t slice evenly…and let’s face it I did some badly on purpose since he’s just so cute!) and tossed them in a bit of lemon juice and white sugar and popped them in a casserole dish. I made a crumble topping with the brown sugar, oats, flour, a drizzle of olive oil and canola oil (it’s pretty much flavorless and I didn’t want the olive oil taste to be overpowering), and for good measure a healthy does of lite maple syrup. I crumbled this mixture on top of the apples and baked it until the apples were soft and the crumble was golden brown and crisp. It was darn good! And, in addition to being thrown together from very common ingredients, it was nearly healthy! Olive oil instead of butter, lite maple syrup instead of some of the sugar, oats, and a ton of apples–see it’s actually semi-healthy (as opposed to my usual, “well chocolate has anti-oxidants so it must be healthy.”)

Anyway, enough rambling (this is what happens after a transatlantic flight!) 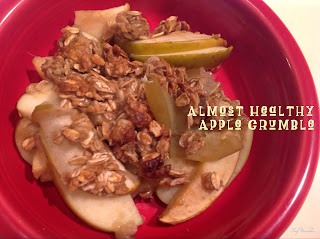